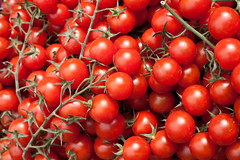 Tomatoes, the most widely produced fruit in the world, contain a nutrient which could prevent the onset of vascular diseases. The compound, 9-oxo-octadecadienoic, was found to have anti-dyslipidemic affects. Dyslipidemia is a condition caused by an abnormal amount of lipids in the blood stream. It can lead to vascular disease.

Tomatoes are already known to contain many other compounds beneficial to health.